We all have a bunch of herbs and spices in the back of a cupboard somewhere. They’re unused, old and forgotten, but why? Because we don’t always know what to do with them. It can be complicated to create great flavour combos with panache. Since we don’t know what goes into a good herb and spice mixture –and don’t want to ruin a dinner if the combo isn’t that good – we tend to forget about them.

But what if we told you that there’s a solution to this problem?

For meat, it’s pretty simple to find herb and spice combos, but for veggies, it’s another story. Here’s a guide for veggies and herbs and spices that go well together.

Here’s our printable guide: Guide for great herb and spice combinations for veggies

With its herbaceous flavour, asparagus works really well with the magic of mustard, nutmeg, sesame seeds and tarragon. Want to add a little heat? Try this asparagus and mango salad!

Herbs, as well as spices like nutmeg and mustard, are great choices to enhance broccoli’s natural taste. Try this chick pea, broccoli and apple salad with caramelized pecans to discover the hidden flavours behind the union of mustard, maple syrup and broccoli.

If you’re the kind of person who can only eat carrots with honey or butter, then we’re at the point of revolutionizing the way you enjoy them. With curry, cinnamon or ginger, it’s an Asian taste profile that’s simply divine! Allspice is excellent in carrot purée as well. More classic, tarragon, dill and bay leaves will give a more herbaceous flavour to your recipe.

You often sauté mushrooms in butter, but have you ever considered adding herbs to them? You’ll see, the flavours are just out of this world!

Add a little life to your Brussel sprouts by seasoning them with curry, mustard, sage, nutmeg, oregano and even rosemary. Even the fussiest eaters won’t be able to resist.

Its delicate taste allows you to add a little spice or other flavours to it. Red pepper, cayenne, paprika and other fine herbs are perfect choices.

As part of the 7 easiest veggies to grow, you’ll often find cucumbers at the table. You’d be surprised by the explosion of taste when you add dill, mint, parsley and even cumin.

Squash is the go-to veggie par excellence when you’re craving something a little sweet. That’s why allspice, cinnamon, clove, ginger and nutmeg work well as seasoning. To learn more about squash, read our article.

Whether you enjoy spinach in a stir-fry or a salad, there are several herbs and spices that can help enhance its taste. Spicy or sweet, there are so many possibilities!

Like cucumbers, beans are one of the 7 easiest veggies to grow. That’s why you can get them anywhere. Try sautéing beans in butter with herbs and spices. You won’t be disappointed!

As we often associate butter and salt with corn, we sometimes forget that its delicate flavour goes really well with spicier spices. Dare to experiment with this colourful corn salad!

Whether you’re used to eating green peas by themselves or in a recipe, they’re delicious with a little seasoning. Eat them with herbs or for a little heat, add a dash of red chili peppers. 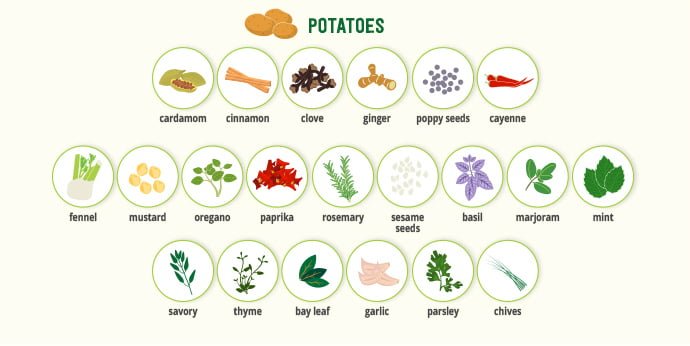 It’s not really complicated, everything goes with potatoes! Regardless of your tastes, you’ll be sure to find herbs or spices that will make your mouth water! 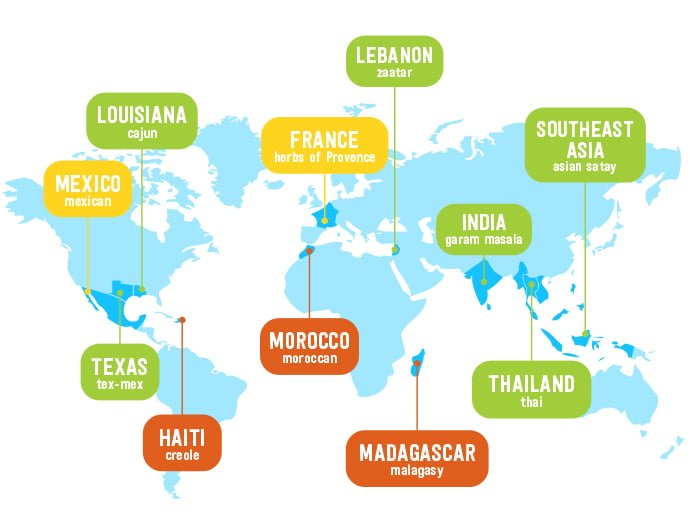 You’re in the mood to vary herbs and spices, but don’t know where to start? Luckily for you, world cultures make that an easy task. Here are a few of the best known mixes from around the globe!

India is bursting with all kinds of spices. Turmeric, cumin, cilantro or coriander, pepper – all delicious herbs and spices that are easy to find. For recipe ideas, try this vegetable biryani and veggie samosa.

Meaning “hot” and “mixture of spices”, garam masala is one of the most popular Indian spices. Although there are as many variations as there are recipes, the spices mentioned are just a suggestion. You can find different versions everywhere. The mix is always delicious in a vegetarian dish or to make lamb or chicken more fragrant.

Thai cuisine seems to be flourishing on recipe sites. What could be better than using Thai herbs and spices and adding them to your repertoire? With meat or veggies, this mixture combines with unlimited possibilities.

Although peanuts are the main ingredient in this blend, many herbs and spices are used. In Canada, the traditional peanuts are grilled and crushed into a peanut butter for a result that’s just delicious.

Thinking of Provence often congers up images of lavender fields, but it’s their herbs that are forgotten. Like a master key, Herbes de Provence boasts all the herbs collected from the region that it’s named after. Whether it’s a veggie stir-fry or sautéed beans à la provençale, there’s a recipe that will satisfy your taste!

These herbs and spices have several uses. Traditionally, they were used in tajines, teas and couscous. Try them in this Moroccan red lentil veggie soup!

Less known, this mixture that comes from the Island of Madagascar is bursting with flavour. It would be interesting to vary the combinations of herbs and spices – without necessarily putting them all in all the time – to tantalize your taste buds.

A Louisiana classic, a Cajun spice mix is spicy and fragrant without being salty. Meat, veggies, legumes – it goes with anything and everything! Try this fragrant spicy roasted peas with Cajun seasoning and you’ll be bewitched!

Native to Texas, but inspired by Mexico, this mix is perfect for tacos, burritos and chilis. Try this slow cooker vegetarian enchiladas recipe – you’ll know delicious when you taste it!

A spice mix that everybody loves, you imagine mainly in Mexican dishes, but that’s not a must! Sprinkle it on veggies, stir-fries and even steak for the most succulent of suppers!

Although it’s often associate with the Creole culture in Haiti, many areas like Reunion and Martinique are considered Creole and each one has its own variation of this mix. It inspires many recipes like some curries and this Caribbean slow cooker pork stew.

Frequently used in Middle Eastern cooking, za’atar is a mix that can be used in just about anything. Traditionally, it’s served with fresh cheese, as a spread on bagels or with hummus and baba ghanoush. You can also mix it with olive oil and serve it as a dip for pita and veggies or as a salad dressing.

Herbs and spices don’t stay fresh very long. A year after they’re put on the market – meaning that they’re not usually stored properly – their flavour and aroma start to deteriorate. It’s not dangerous, but you certainly won’t taste them as much.

Have a lot of herbs and spices in the cupboard? Your nose is your best friend to determine if they’re still good. If you can’t smell anything, you won’t taste anything either, so just take a pass.

The best solution to their short shelf life is to buy in small quantities. As you should renew them every year or so, you’ll waste less.

So now you’re ready to cook with the herbs and spices that are in the cupboard. Do you have any tricks or family recipes? Don’t be shy to share!

As a student in Communication at the University of Sherbrooke, Valérie has been feeding her passion for food since she was little. For her, eating well is the best cure for everything and anything. From healthy food to the sweetest of desserts, nothing escapes her curiosity or quenches her thirst for all things gastronomique. It’s through her articles that she’ll share with you her love of food.

Groceries 101: Everything you need to know for the first time you do groceries! Whether it’s because you have to or because of your…