More and more, one-bowl meals are rocking social media. Everyone’s talking about them and restaurants are offering them as much as ever. For breakfast, lunch or dinner, they’ve become a must-have in 2017. That’s all nice, but other than being visually appealing, what exactly is a one-bowl meal?

It’s fairly common nowadays to find beautiful bowls in kitchen stores. They’re so gorgeous it’s not hard to imagine enjoying all of our meals in a bowl. That’s why you see recipes modified specifically to be enjoyed in this type of vessel. Whether it’s burritos, stir-fries and even sushi bowls with Sriracha mayo, plates have fallen by the wayside.

It’s becoming even more and more common to replace traditional fixings with a bowl filled with just one thing. Among the most popular are tortillas like this taco salad with homemade tortilla bowls, as well as bread like in this slow cooker veggie chipotle chili.

Quick and nourishing, one-bowl meals are as good as any traditional meal served on a plate. Here is a short list of the ones you just have to try once in your life!

Surely the best known of the one-bowl meals, the Buddha bowl is all the rage. Known also as glory bowl or hippie bowl, it’s always a completely succulent dish. Many different theories are going around on the origins on its own. The most realistic is that because he was vegetarian – in other words vegan – the Buddha bowl respects all living beings which is what Buddha preached. Another theory is that a bowl that’s filled up looks like Buddha’s belly.

Often vegetarian, sometimes vegan, a Buddha bowl is a healthy meal. Despite their flashy appearance, the following recipes follow a very similar model.

First of all, vegetables. They should take up about two-thirds of the bowl. You can do whatever else you’d like with the rest. Whether you prefer fresh or roasted, choose by season or theme, your imagination is the only limit!

Next comes grains. Quinoa, rice, millet, orzo – anything you think of is possible. Normally, it represents about a third of the space in the bowl.

To make this dish nourishing, obviously it needs a protein! In most cases for Buddha bowls, it means a plant protein, meaning tofu, beans, hummus or edamame, for example. However, you often find versions with eggs or even cheese like halloumi.

Depending on the ingredients you’ve chosen, the sauce you put in your Buddha bowl can vary. Our suggestions? A peanut dipping sauce or tahini sauce can complete an Oriental-inspired dish wonderfully and a Balsamic vinaigrette marries deliciously with a bowl filled with greens. A dish made up of chick peas can make a perfect side for leftover butter chicken.

Finally, the extras. Top your bowl with what looks the most appetizing: dried fruit (for example, cranberries, apricots, raisins), nuts, seeds, herbs or even sprouts (alfalfa, for example). These ingredients will add a nice crunch to your meals.

A variety of colours and textures make Buddha bowls visually appealing. Having vegetables of different colours is an excellent way to make your meal a pleasure for the eyes to devour. For texture, combining raw and cooked ingredients gives your tummy an experience it’ll want to relive again and again!

Want to try it? Our Californian veggie Buddha bowl is just the recipe for you!

Very similar to the Buddha bowl in terms of ingredients, the dragon bowl has a little something up its sleeve: its sauce. It was only recently that the vegan restaurant Aux Vivres revealed this fiercely guarded secret. Despite the numerous recipes that are circulating online, the success of this one is crazy. A warning was even launched to consumers saying that the sauce was dangerously addictive. Once you’ve tasted it, you can’t live without it! Without further ado, here is the delicious recipe:

A classic Hawaiian vegetarian, the poke is really becoming popular. For people who love raw fish, this is a revelation! This dish is composed of large cubes of raw fish or seafood generally seasoned with soya sauce and sesame oil. It’s accompanied by seaweed, avocado and rice, and garnished with sesame seeds, shallots and minced jalapeño. It’s important to dip the fish in the marinade two or three hours ahead of time. For a classic recipe, try this homemade ahi tuna poke bowl recipe, but for something a little crazy, try this sesame and soy watermelon poke instead.

Looking for a vegan version? Replace the fish with tofu, seitan or tempeh and voilà! 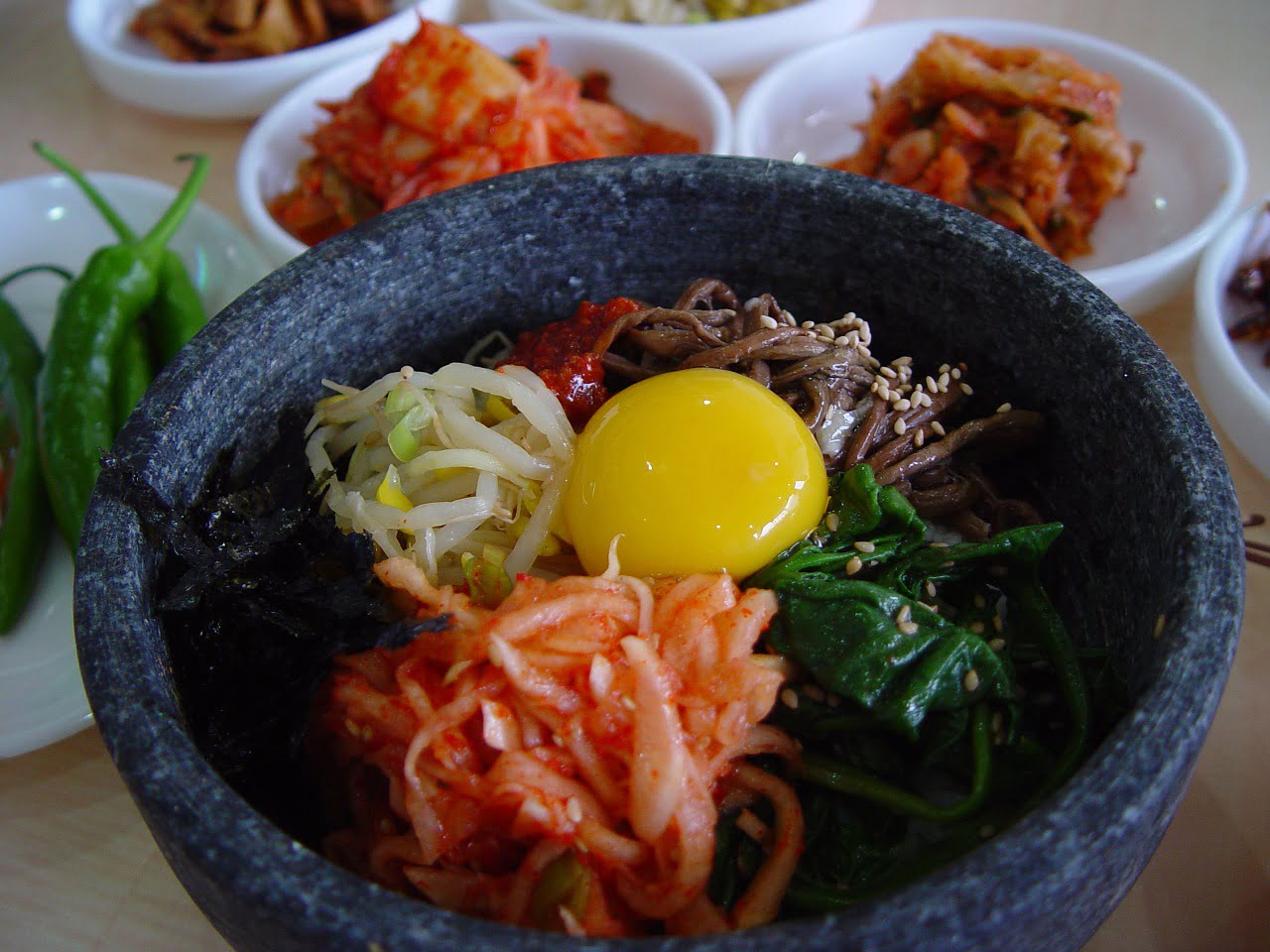 Originally Korean, bibimbaps made their way to Canada a long time ago. Although less known that other types of bowls, they’re becoming more popular because other one-bowl meals are becoming popular. It’s an exquisite marriage of rice, beef, seasoned blanched or stir-fried vegetables topped with an egg.

Although originally served with meat, vegetarianism has given rise to meatless versions. So why not try this vegetarian Korean dolsot bibimbap, a delicious variation of the Asian meal.

Everyone knows that breakfast is the most important meal of the day. If you’re like me, you’re starting to get tired of toast and cereal, so what could be better than a nice banana chocolate chunk smoothie bowl or a banana and coconut smoothie bowl with chia, muesli and pomegranate seeds to start the day!

You’re now well-equipped to start benefitting from this delicious way of eating, if it’s not already the case. Let us know which are your favourite bowls and most of all, don’t hesitate to share your recipes with us!

As a student in Communication at the University of Sherbrooke, Valérie has been feeding her passion for food since she was little. For her, eating well is the best cure for everything and anything. From healthy food to the sweetest of desserts, nothing escapes her curiosity or quenches her thirst for all things gastronomique. It’s through her articles that she’ll share with you her love of food.

Sometimes we waste without realizing it. Whether it’s a slice of bread, a banana or leftover lasagna, you’ve probably thrown food out this week,…