It’s not always obvious how you can pick lots of cherry tomatoes from the garden, then cook enough recipes to avoid food waste. But that’s no reason to give up on the idea of growing your own vegetables or stocking up at the local market so you can eat seasonal vegetables all year round. There are several ways to keep summer veggies longer. Each has its own advantages and disadvantages and a different shelf life, and each has recipes that are best suited to it. That’s why we’ve highlighted 4 preservation methods so that you’ll be ready to harvest a lot.

When you buy veggies or pick them directly from your garden, it’s obviously great eating them fresh in a salad or a good vegetized recipe. Some veggies keep a lot longer than others, even in the cupboard. That’s the case for potatoes, squash and root veggies that can last for several weeks in the pantry. The same for onions. On the other hand, leafy vegetables, peppers and zucchini don’t keep that long and have to be refrigerated. You should keep that in mind if you’re preparing a recipe and doing groceries ahead of time.

Read this article to know exactly where to keep each vegetable and for how long.

« It’s a process that’s a lot easier than you think and it’s been around for hundreds of years. It’s simply a matter of immersing veggies in a jar of salt water brine without air. »

As there are several veggies that don’t keep that long, it’s good to know long-term preservation methods. And lacto-fermentation is part of that. 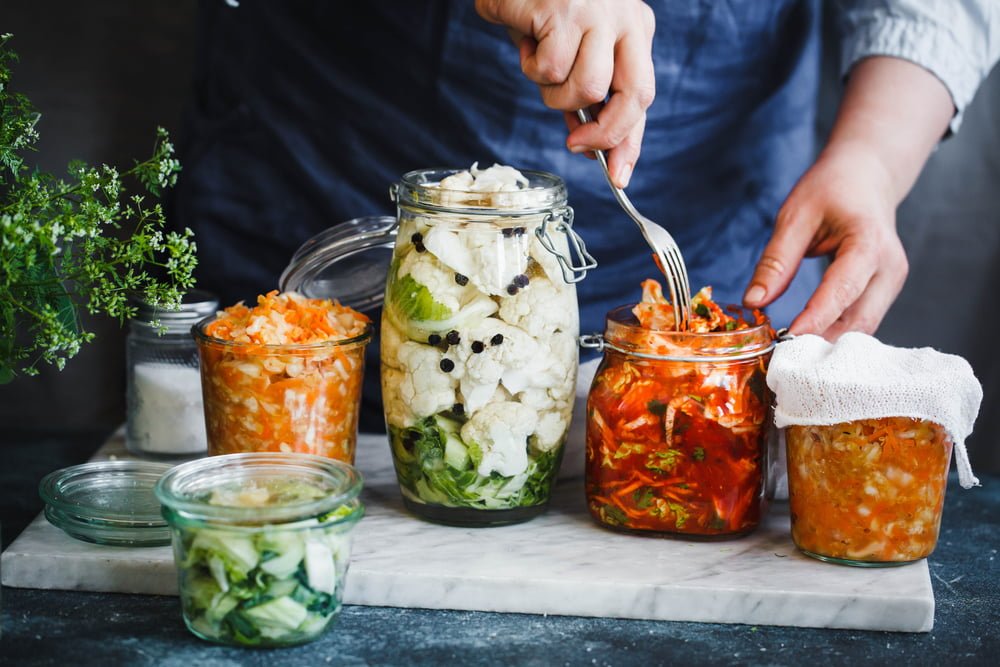 What’s lacto-fermentation all about?

It’s a process that’s a lot easier than you think and it’s been around for hundreds of years. It’s simply a matter of immersing veggies in a jar of salt water brine without air. Fermentation occurs when good bacteria like lactic acid is released and enzymes and vitamins multiply. The lactic bacteria that forms during the lacto-fermentation period are, in fact, easily created probiotics. Microorganisms are eliminated and that’s how the jars can be kept for a very long time.

Did you know that since sauerkraut made from lacto-fermented cabbage contains multiplied vitamin C, it’s been proven to be the answer to scurvy on boats during large expeditions? By storing sauerkraut on the boat, James Cook, the English explorer, found the cure for this disease caused by vitamin C deficiency.

Which veggies can be lacto-fermented?

You can lacto-ferment almost anything:

Basically, pretty much any edible plant.

First of all, even though the idea of letting food ferment can seem counter-intuitive, there really is no need to worry. If you fail your test and microorganisms survive, you’ll see it right away in the pot. Your recipe will have an unappealing colour, smell and taste. If that’s not the case, then your fermentation has succeeded. Lacto-fermenting veggies isn’t an exact science, but there are several basic tips you should follow.

What you’ll need for lacto-fermentation at home:

Some veggies, like carrots, beets and onions, are better cut into small pieces. If you like this kind of fermentation, there is a difference: contact with salt will cause the vegetables to release moisture, so using water is optional. This is called souring the vegetables. Adding a little water will make them sweeter and crisper. You can:

To preserve vegetables longer, it’s absolutely essential not to put your fingers in the mixture or put a utensil in twice.

How much time can you keep your fermentations?

The jars can be stored in a cool place for months, even years. It’s up to you to put your fermentation in a cool place with its attained the desired temperature. Containers that don’t have oxygen in them keep much longer. Once you’ve opened the jar, keep it in the fridge for a few weeks. There’s no exact science to know if your vegetables aren’t edible anymore. You have to use your judgement.

Lacto-fermentation without salt – it is possible?

Yes it is, but it isn’t ideal. The salt serves to create a reaction with the bacteria. It doesn’t necessarily make the mixture very salty. Without salt, there’s a risk the fermentation will mould and the preserves won’t keep as long. All the more reason to make lacto-fermentation with salt!

Recipes to inspire you

First of all, lacto-fermented veggies without a specific recipe are good as sides or in salads and sandwiches. If you’re looking to season your veggies in a different way, here are a few ideas:

« Making a fail-proof, homemade preserves isn’t magic. Just follow the steps without cutting corners and the delicious summer vegetables will keep for ages. » 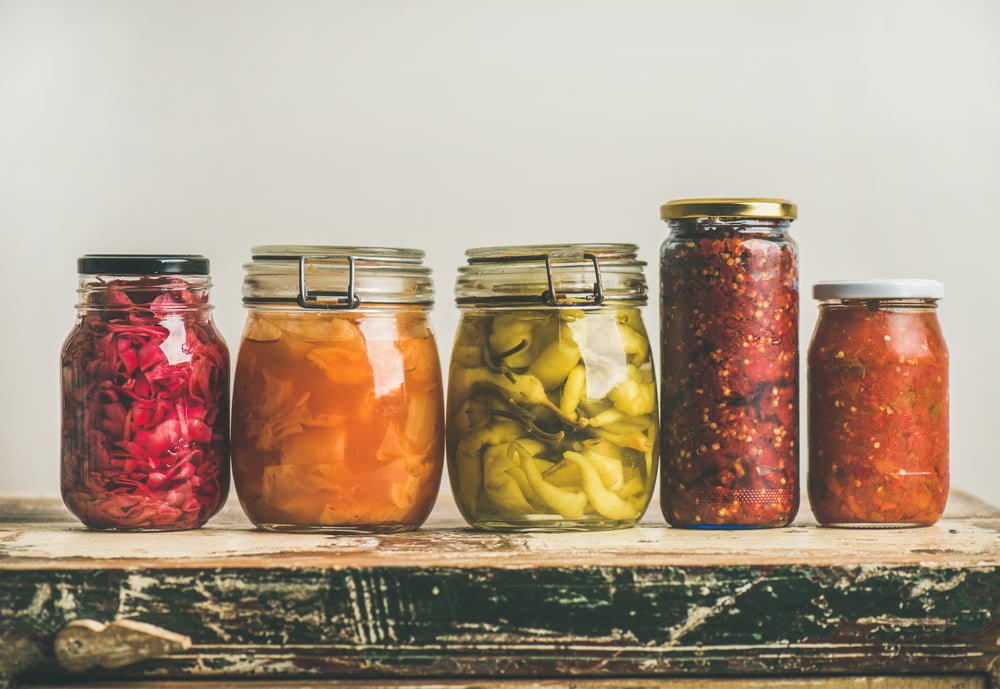 Another way of keeping food in jars is canning. The food isn’t preserved in a salty brine like in lacto-fermentation, but instead by the heat and pressure applied to the jar.

Making a fail-proof, homemade preserves isn’t magic. Just follow the steps without cutting corners and the delicious summer vegetables will keep for ages. There are two methods of preserving food, the pot and the pressure cooker, which we explain below.

A large pot is often the container you have on hand, but it’s not suitable for foods that aren’t acidic enough. When the acidity level is below pH 4.6, a pressure cooker is necessary, but not mandatory, for more acidic foods. Here’s a chart to show you what type of heat is appropriate for the foods you choose:

To help inspire you, here are a few recipes to showcase your veggies: 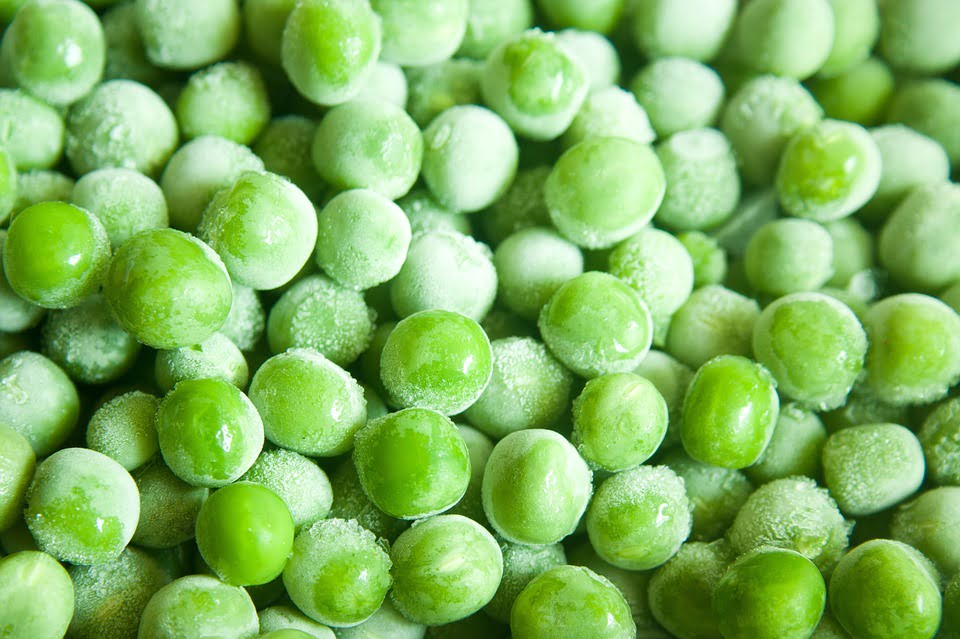 Even though lacto-fermentation has long proven its worth, the advent of the freezer has made it possible to freeze vegetables. Very practical for avoiding food waste, it also keeps the taste of vegetables intact when used in a recipe. However, not all veggies can be frozen.

Which veggies can’t be frozen?

Almost all vegetables can be frozen except:

Some veggies can be frozen, but their texture isn’t appealing once cooked, so that’s why it’s better to cook them before freezing. That’s the case for any veggie that’s full of water :

And that’s why we’ve come up with a new technique to freeze these last three veggies which brought to life our line of products. They’re slightly dehydrated to prevent the thawed product from being saturated with water.

How do you freeze vegetables?

You start by washing the vegetables and cutting them into the size you want. Then, blanch them, meaning plunge them into boiling water for a few minutes, then into ice water to stop the cooking process. This kills all bad enzymes that could change the colour or texture of the frozen veggies.

After blanching, it’s important to wring the veggies out before putting them in the proper container. That way, they won’t be covered in ice. You have to fill the containers well because if there’s too much air, the veggies will dehydrate. On the other hand, you shouldn’t fill them up too much because veggies expand while freezing and the containers could crack or burst. Here are some tips on which containers to use:

Can you freeze cooked vegetables?

As mentioned above, beets can only be kept cooked. In fact, sometimes it’s easier to freeze cooked veggies. For example, it’s possible to freeze raw tomatoes, but they’ll have an unappealing texture after thawing and will have to be cooked to enjoy it. So, putting them in the freezer already cooked makes more sense. This is also the case for water-rich vegetables, such as peppers.

How do you cook frozen vegetables?

To eat frozen veggies, you have to put them directly into the recipe. Sometimes, it’s better to cook them before adding them. It’s better to enjoy them in a recipe because freezing often changes their texture. You can improvise recipes like a clean-out-the-fridge soup. Here are some other recipes to give you ideas:

Can you freeze recipes that use frozen veggies?

Yes. For example, you can definitely make a spaghetti sauce with frozen veggies and freeze it afterwards.

Finally, if you want to know more about food preservation, read our article called, Storing Food: 5 mistakes that are made too often.

Keeping summer vegetables for a long time not only allows you to enjoy delicious vegetables past summertime, but also to reduce your environmental footprint by buying local vegetables. You now have several tools that will ensure you’ve got food preservation down pat. So go ahead, give it a try! What will you try first?

Camille, student at Université de Sherbrooke in communication and marketing, loves nutrition, cooking, and training. Her creativity pushes her to explore new flavours and tips that she would love to share with you!

Back-to-school and the return of the spring break are moments like many others that aren’t for relaxing. They’re often periods of adaptation that require…