The ABCs of empanadas

Empanadas are undoubtedly part of the gastronomic tradition, particularly in Spain and Latin America. So there’s a lot of different kinds of empanadas in the world.

But what are empanadas exactly? It’s a food made with corn or wheat dough filled with meat, veggies or seafood and can be oven-baked or fried.

The name of this traditional Spanish food empanar means “close something up in a dough or bread, then cook it”.

If you’re ready to throw yourself into making a batch of empanadas, here’s a little guide that’ll tell you everything about them, from how to prepare them (click here to go directly to preparation), to what to serve them with and how to store them. Evenings with friends and family will definitely be delish!

The origins of empanadas

The origins of empanadas date back to the time when shepherds and travellers filled bread with meat and veggies for nourishment in the countryside.

Over time, the stuffed dough was baked and later on, other types of dough were created to wrap the filling.

This type of preparation gave birth not only to empanadas but also to Italian calzones and English meat turnovers known as Cornish pasties.

In the Middle Ages, the purpose of this kind of food was to preserve the filling because cooking it inside the dough allowed it to be kept for several days. At that time, the Spanish made empanadas with wheat flour.

Over the years, other types of empanadas were created in Spain, which then went to Latin America with the conquistadors.

Once in Latin America, preparations and fillings varied because of indigenous and African influences. Corn meal and other types of veggies and fruits were introduced.

Empanadas have a long history and are present in many countries. Today, there is a wide range of fillings and dough. We’ll expand upon a few of the most popular ones to see how they differ. 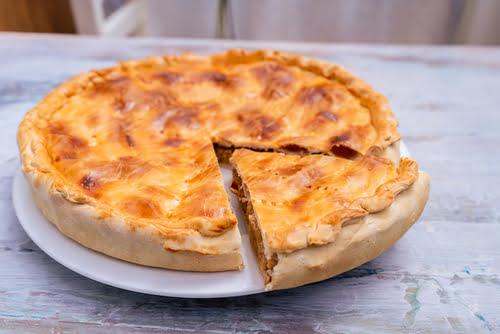 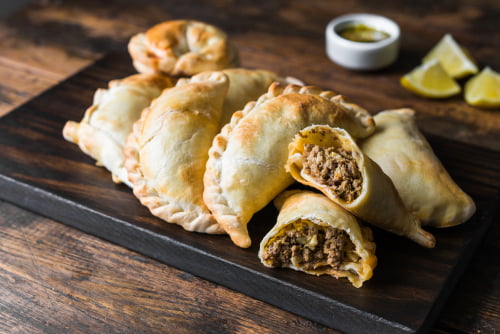 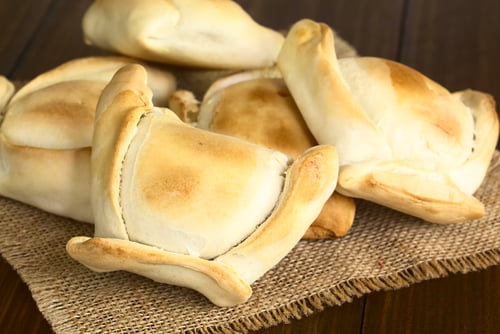 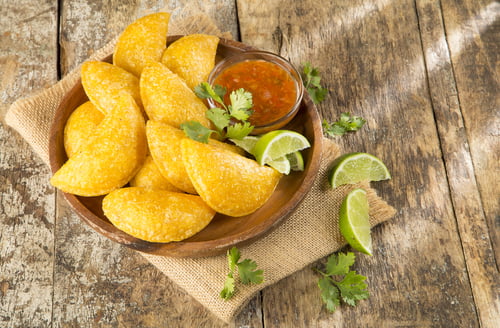 Who says empanadas can only be savoury? Don’t be ridiculous! You can also get sweet versions.

As for sweet ones, the most popular are filled with apples, blueberries, cherries and even peaches spiced with ginger, cinnamon or nutmeg. Another popular ingredient in the fillings is dulce de leche.

Depending on the country, they’re either fried or baked, and the dough is made of wheat flour. 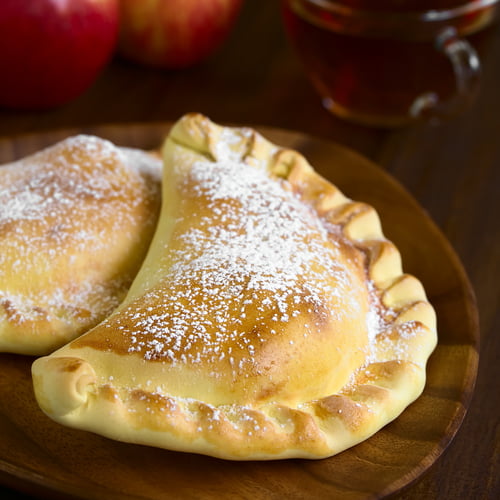 If you go into a restaurant for empanadas, it’s common to find traditional, as well as vegetarian versions. These are a great choice if you want a comforting plant protein dish.

Legumes like lentils, chickpeas and beans are also included.

What to serve with empanadas

There’s nothing better than enjoying an empanada as a starter with a sauce and a drink.

Here we explain some of the sauces that go best with empanadas and the most popular drinks, too.

This sauce of Venezuelan origin is made of avocado, garlic, onion, cilantro, parsley, peppers, vegetable oil, vinegar, salt and pepper to taste.

It’s considered the queen of sauces because it goes great not only with empanadas, but with other dishes like arepas.

The main ingredient is avocado, so the sauce tends to oxidize more quickly than others. It’s best to enjoy them fresh or keep them in the fridge.

You shouldn’t confuse the sauce with guacamole because the big difference is that guacamole generally has peppers and jalapenos whereas guasacaca doesn’t. 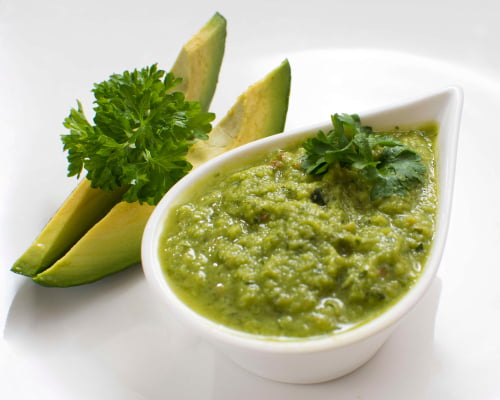 Chipotle sauce is creamy and spicy which enhances the empanada. It’s made from a type of smoked pepper that tastes similar to tabasco or jalapeno.

The smokey taste makes this a great accompaniment for meat and veggies. The key is to let the chipotle ripen on the plant until it’s bright red, then harvest and dry it by smoking it for several days. 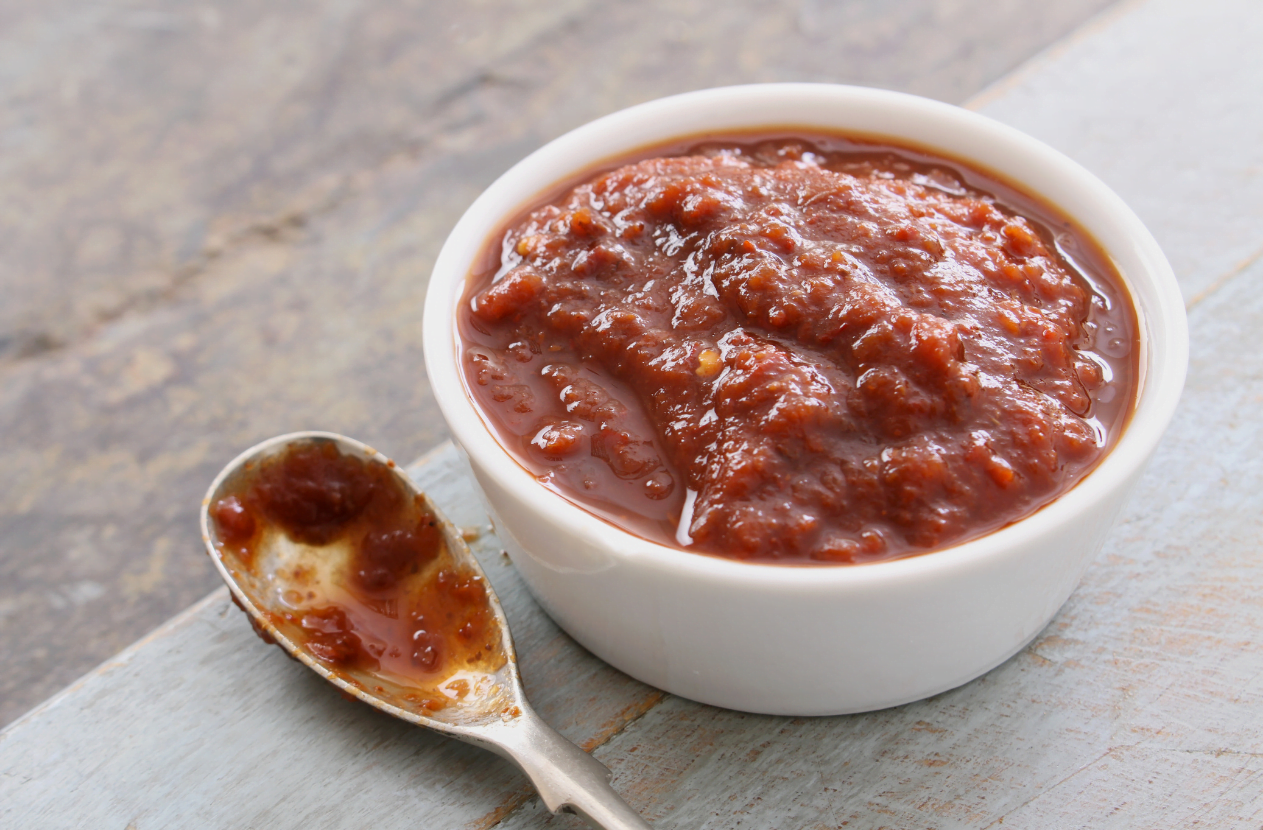 This is the traditional Argentinean dressing par excellence, but it’s just as popular in Paraguay and Uruguay.

It’s an accompaniment not only for empanadas, but also salad, meat and bread. 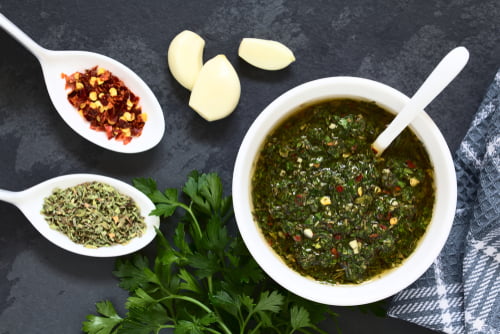 Ají is a traditional sauce from Colombian cuisine. The best thing about this spicy sauce is that it goes great with many traditional recipes.

For example, ají can be an excellent complement not only to empanadas but also for arepas, patacones, etc.

To make it, you need tomatoes, cilantro, ají or habanero peppers, white vinegar, lemon (optional) and salt and pepper to taste.

You choose the level of heat you want from the start. The perfect balance depends on the quality of the pepper and vinegar. 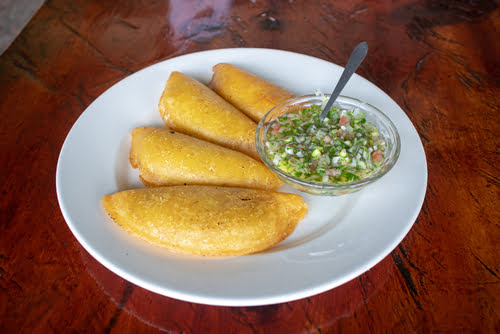 Yasgua salsa is a typical side dish you’d see in northwest Argentina, Bolivia and northern Chile. The 2 main ingredients are ají locoto and tomato. You just need a little vegetable oil and salt to taste.

In some areas of Latin America, as well as being a complement for empanadas, it’s also used for BBQs (discover our guide to an amazing veggie BBQ), sandwiches, and more. It’s also really common to eat it with bread as an appetizer.

It’s best to eat yasgua the same day you make it or to keep it refrigerated no longer than a day, otherwise, the taste intensifies and if you’re not used to spicy food, you’ll find it too hot. 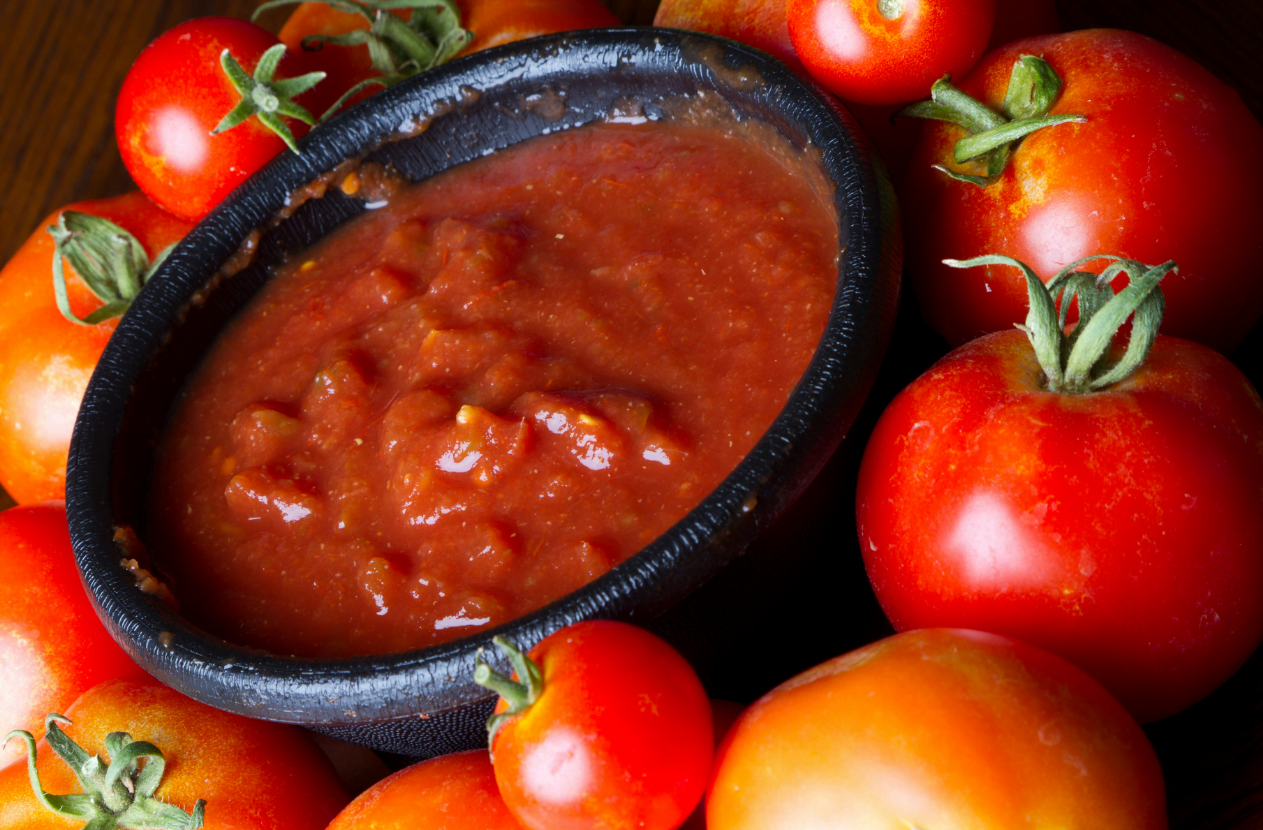 There are no rules when it comes to the best drinks for empanadas. Honestly, everyone’s tastes are different. But some drinks are more typical with empanadas.

In Argentina and Chile, people enjoy them with a good glass of wine. Oh yeah! Empanadas and wine are a match made in heaven.

In general, red wine really enhances the flavour of meat, ham or cheese empanadas. Malbec and Cabernet Sauvignon would be a good start.

For chicken, fish or veggie empanadas, white wine is recommended for its light taste. Try a Chardonnay.

In other regions of Latin America, notably Colombia and Venezuela, people usually eat empanadas with Malta, a soda that’s very popular in these countries.

It’s a non-alcohol pop made with malt. In Latin grocery stores, Pony Malta or Polar Maltin are the brands to look for. You’ll discover how the taste of malt pop is the perfect match for empanadas.

How to make Colombian empanadas

Now that you have discovered more about empanadas, here’s a recipe for homemade Colombian empanadas.

The filling is made of meat and potatoes in the traditional recipe, but today, we’ll be making vegetarian ones (spinach and cheese) while respecting the traditional preparation and cooking methods.

Ingredients for the dough

Let’s start with the dough. To make the dough, you’ll need the following ingredients:

Steps for preparing and assembling empanadas 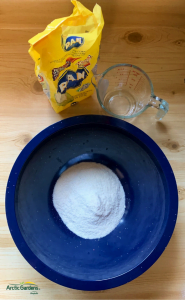 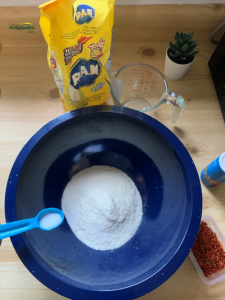 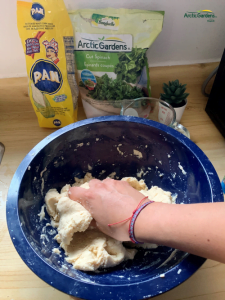 How do you know when the dough is ready? After kneading for a few minutes, the dough shouldn’t stick to your hands. If it does, add a little more flour. 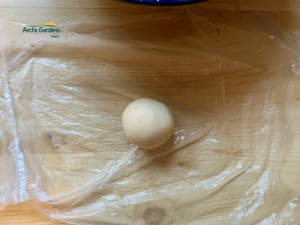 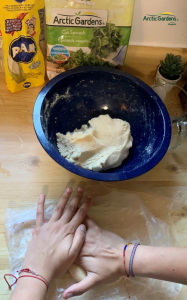 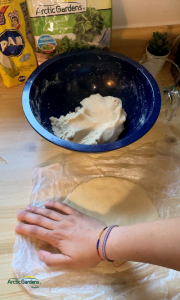 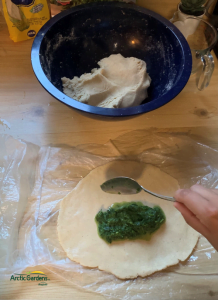 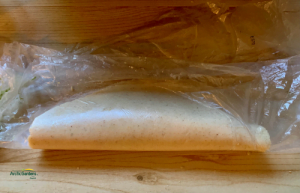 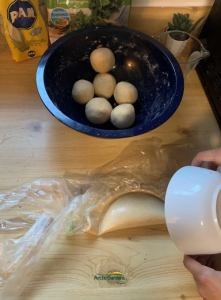 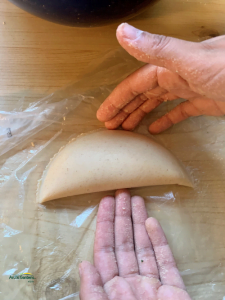 Ingredients for the filling

Now we’ll explain to how make the spinach and cheese filling, but you can use any filling you want. In our recipe section, you can find other kinds of vegetarian fillings for empanadas (click this link).

But for now, here are the ingredients you’ll need for the spinach and cheese filling:

Steps for the filling 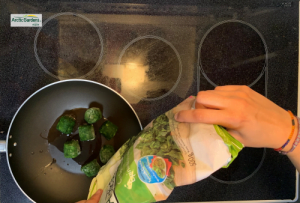 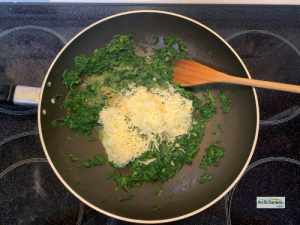 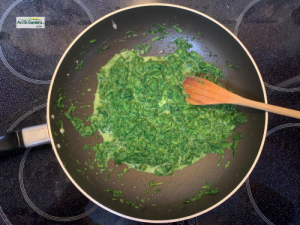 Now that the empanadas are ready, it’s time to fry them up! 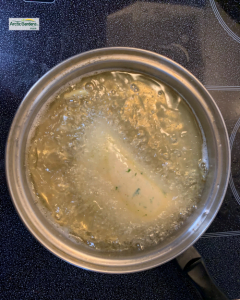 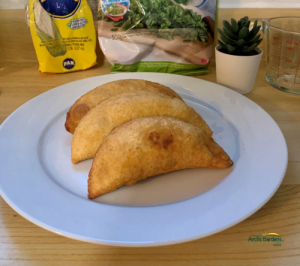 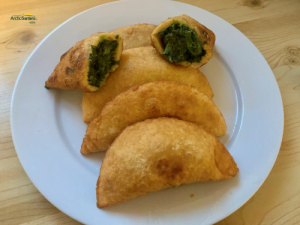 And there you go, delicious homemade empanadas!

How to store empanadas

One of the great things about empanadas is that the dough allows the filling to keep. So you can leave them in the fridge and when you’re in the mood, just reheat them in the oven or microwave.

When making empanadas, whip up a big batch and leave a few uncooked in the fridge. Then when you’re ready to eat, just fry one up and you’ll have fresh, hot empanadas!

Remember, we recommend storing empanadas in the fridge for 3 to 5 days max, otherwise, the filling loses its freshness. (Please read our guide to storing food).

You’re now an empanada pro! As well as being totally delish, it’s a flexible recipe you can adapt to any meal and it’s homemade! Let us know in the comments section if you’ve tried making empanadas and what your fave filling is.

And as a bonus before signing off, if you ever want to throw yourself into homemade cooking, why not take a peek at our guide to making fresh pasta. We promise it’ll be a huge success!

Always interested in learning more. Daniela loves languages, trying new recipes and enjoying good food. A Master's student in Marketing at the Université du Québec à Montréal, she will share with you her tips and discoveries about food and wellness.

So now that the cold is definitely here, it’s time to prepare for the frenzy of the holidays. Family dinners or a good meal…