Have you ever had trouble getting your kids to eat their veggies? All parents have their own way of getting their kids to eat a varied diet! That’s what Arctic Gardens and its creative advertising team wanted to show in the TV campaign launched in 2014.

Fifteen second spots showcase kids doing silly things they hide from their parents. Using a cellphone as a bath toy, tearing up a report card, brushing the dog’s teeth with mommy’s toothbrush – these kids are irresistible. Then they find themselves in front of a plate of Arctic Gardens veggies. After their parent reassured them that it was just macaroni, chicken pot pie or spaghetti, the kids enjoyed their meals without realizing that they were eating veggies!

Come backstage with us! Here are the unpublished details on shooting the commercials and a few secrets about them.

Before running commercials on TV, you have to shoot them first! Here are a few little known facts followed by some pretty funny stories : 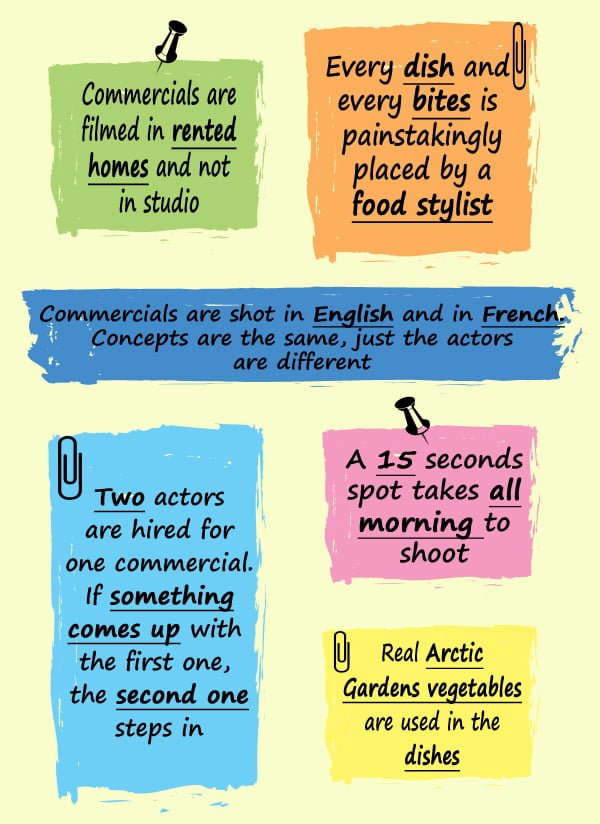 Filming kids is always entertaining especially when they’re in situations as funny as in the Arctic Gardens commercials. How can you not laugh when a little girl tries to scare her teddy bear by wearing her grandma’s dentures? Or when you see a boy covered from head to toe in mud scribbling on a beautiful white couch? Here are three charming stories that happened while shooting the commercials:

Even though kids seem rude in the commercials, it was just the opposite during shooting. One little actor ate his soup while trying to hide the fact that he didn’t like it. Seeing that he couldn’t say it, the film crew asked him what was wrong and he answered that the soup was good, but it was cold. Oops! While adjusting the scene and lighting, we totally forgot to reheat the soup!

Among the new commercials shot in 2015, we found this little girl brushing her dog’s teeth with her mom’s toothbrush. While filming, the little actor was so delicate with the dog that she had a lot of trouble keeping his head up to brush his teeth. Being heavier than the little girl, the big lazy dog decided not to cooperate at all, so laid down every time we said, “Action!”

At the end of the commercials, the kids ate whatever was in front of them. As there were many takes with the little actors, the film crew suggested they not swallow their food, but spit it out instead. Most of the kids refused to do that because the food was just too good. Some even asked for more after the shoot! We really see that dishes made with Arctic Gardens veggies are really popular with kids 😉

We worked with Luc Du Sault of lg2, creative director of the ad campaign, to learn a bit more about developing the concept and idea behind the ad.

Kids are known for playing tricks who hide them pretty well. Did you recognize your own kids while watching the little ones on camera? We bet these situations put a smile on your face!

How do you show that Arctic Gardens veggies are well-hidden in dishes in a funny and endearing way? By making sure that the kids who eat them don’t know that they’re eating them! Parents can do the same to their kids by being even sneakier.

In the end, the creative team wanted to show that Arctic Gardens is THE solution to add veggies to kids’ diets in a tasty way – all with a sense of humour and situations showing that all parents will go through this eventually.

Something New at Arctic Garden 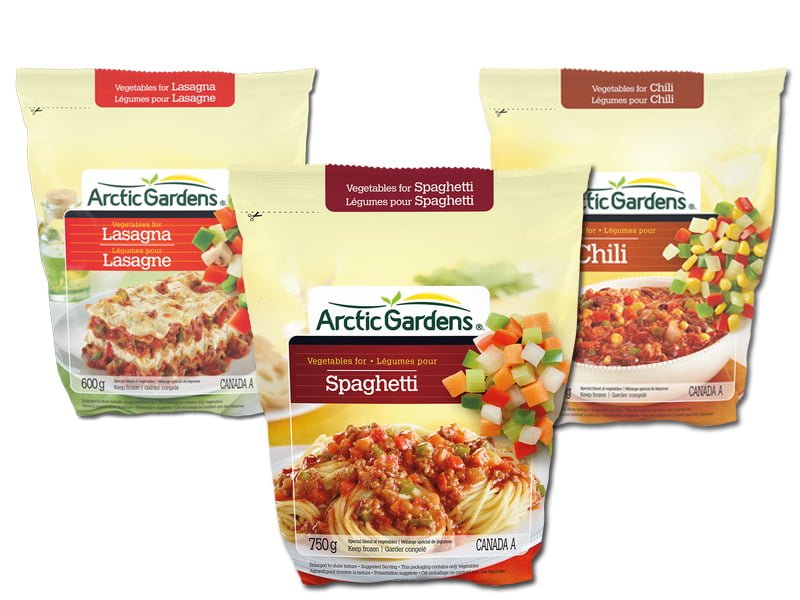 Every parent has had to face a fussy eater whose main issue is veggies. That’s what inspired the Arctic Gardens’ creative advertising team.

Arctic Gardens vegetable mixes are often associated with dishes that kids like. We just have to think about vegetable mixes for spaghetti, macaroni and even the slow cooker. Kids like these meals even without knowing that veggies are hidden in them. That’s what the advertising creators wanted to show: that Arctic Gardens vegetables blend so well into our recipes that even your kids will eat them up!

For Luc Du Sault, the commercials should “acknowledge situations that parents can experience on a daily basis”. Of course, they’re caricatures of real life and the situations exaggerated. These commercials have to be taken with a grain of salt and a sense of humour.

With its wink to lying, there was a lot of reaction to the ad’s concept. However, a study done on the advertising message clearly showed that it was well-liked. In fact, 72% of people in the Maritimes liked the commercials and 80% in Québec did, too! Respondents said they thought the commercials were funny, endearing and creative. Some could even relate because they have their own strategies to get their kids to eat their veggies.

The Arctic Gardens commercials were made to entertain people. The educational part is on the Artic Gardens blog where you’ll find many practical articles. Here’s one that suggests 11 ways to get your kids to eat more veggies!

As most people liked Arctic Gardens’ ad campaign, we concluded that the public saw itself on the small screen. Obviously, the ads are a caricature of reality: parents’ strategies to get their kids to eat veggies are less radical and more educational in real life. Have you ever tricked your kids into eating better? What are your best tricks?

Student in Communication, Writing and Multimedia at the University of Sherbrooke, Sabrina likes every thing about food. She loves to cook for her family and friends. Her speciality: comfort food! Naturally curious, she’s always ready to learn more about nutrition, cooking and gardening. She’s happy to share with you her knowledge and new discoveries about the world of food.

With back to school and back to work, you’re back to the grind: mornings are shorter and days are longer. Between the busy commute,…