Every family has their own tricks to get their kids to eat veggies every day. As a parent, you often have to try several things before finding the one that works best for you. To help you use these tricks better, we surveyed 2,000 parents in March 2015. We asked them a few questions using a Survey Monkey-type survey about their daily habits when it comes to eating veggies. The results gathered allowed us to come up with a list of the best methods used, as well as kids’ top favourite veggies and dishes that integrate veggies more easily.

Not all parents feel their kids eat enough veggies

Society bombards us with messages telling us that we don’t eat enough veggies and that we have to add them to our diet gradually every day. But are we really lacking vegetables from our diet? The 2,000 or so parents answered the question, “Do you think your kids are getting enough vegetables every day?” Almost 60% of respondents confirmed that their kids eat enough of them. Forty percent believe that their kids don’t. Whether you’re in the 60% or the 40% category, keep encouraging your kids to eat more veggies because the benefits are important for our bodies and minds.

Top 11 methods to try with your kids

This trick was voted as the most effective and most doable. According to nutritionists, kids are in fact more open to taste vegetables when they’re raw, cut well and presented on a nice plate accompanied by dip when they’re hungry and waiting a meal. If you don’t have time and you can’t prepare raw vegetables the same night, prepare them in a large quantity the weekend before and serve a little each day.

2. Integrate veggies into their favourite meals 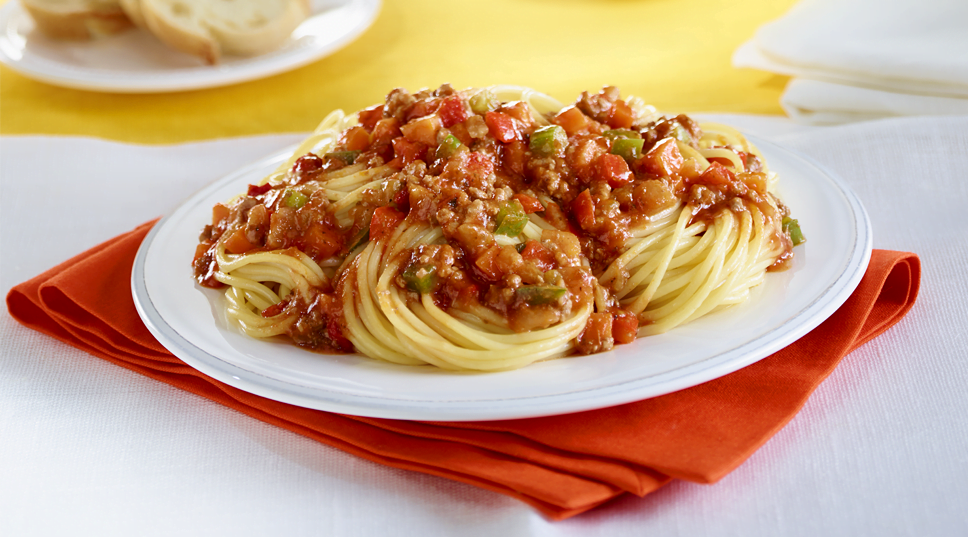 This method was voted second most effective and doable. In fact, every kid has a favourite dish that they’d never say no to. On a pizza, in a lasagna, soup, pasta, quiche or omelette, vegetables will always find their place.

3. Set an example for kids by tasting veggies first

According to respondents, the strength of this method is that it can be applied easily. It’s true that it can be used at every meal. Nutritionists approved this technique because it’s healthy and in addition to getting kids to eat vegetables, it will allow you to teach them by showing them that not only are veggies good for their health, but they taste great, too. As well, kids often mimic their elders, so take advantage of this window of opportunity to show them good habits.

4. Cook vegetables and meals with kids 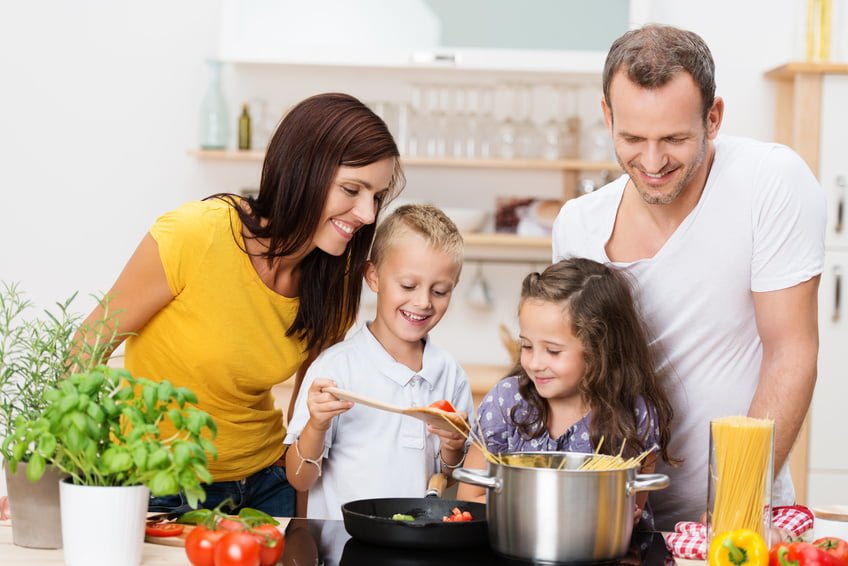 This seems to be the most effective way, but not always doable. Ideally, we would always have the time to cook with kids in order to give them direct contact with various foods and to help them discover vegetables. Unfortunately, kids must often be left out of the cooking process during meal preparation. When you have the time and energy, still give this method a try and you’ll see for yourself the healthy benefits of putting kids in contact with veggies. Often they’re more open to eating a meal they’ve helped prepare.

This way also seems to be as effective as it is doable. It’s simple. When you see your child is getting tired of a certain vegetable and frequently pushes it to the side of her plate, think about varying the next meal. When you bring back veggie #1 later in the meal, she’ll probably eat it because she might forget that she didn’t like it in the first place. But if she still refuses to eat it, simply give her other vegetables or change the way you present this one on her plate by varying the way you cook it, for example.

Instead of burying vegetables under a mound of spices or salt, there are many ways to prepare them to kids’ tastes. Here are just a few:

According to early childhood education experts, sometimes you have to introduce a particular food to a child three times before they’ll adopt it. So don’t get discouraged if it doesn’t work the first time, even if you see that your child doesn’t really like the vegetable in question. This method doesn’t require any particularly effort and it works pretty well. Don’t give up. Cook it again and again even though your child is sceptical and make it in different way. He’ll probably open up to it one day. Also, avoid introducing too many new vegetables in the same plate. One new veggie per meal is enough.

8. Grow vegetables in a garden

This method appears at the bottom of our list because you can’t do it twelve months of the year. Gardening isn’t always accessible to everyone. You have to have time and an appropriate piece of land. If you happen to maintain a garden in the summer, have your kids help out. If they’re old enough, make them responsible for one or several vegetables. Nutritionists approve of this method because it creates a strong desire in children to eat the garden’s vegetables which they are really proud of.

9. Disguise vegetables in the dish

The technique of disguising vegetables by changing their texture isn’t one of the most effective or doable ones. On the other hand, what does seem like a good idea is serving vegetable juice as a first course to a meal or in kids’ lunches, making soups from leftovers to use up several, not-as-fresh veggies, but still be really tasty. You can also make your own tomato or other homemade juice, as well as colourful purées to brighten up a plate with imagination.

10. Do groceries with your kids

If you do run your errands on the weekend, think about bring the kids along. As well as making grocery shopping a family activity, you’ll put your kids in direct contact with food that they can choose themselves if they’re old enough! Of course, this way is the most difficult to do because in reality, we often do our errands without the kids and when we we’re rushed. On the other hand, if you get the chance, try letting your kids choose the veggies they’d like to enjoy raw, for example! According to nutritionists, they’ll be more excited about eating them later!

11. Introduce vegetables in an original way in your kids’ plates

This method seems to be the least doable and least effective. With the exception of breakfast when it’s easiest to make special shapes out of food, we don’t always have the time or the means to do something original with vegetables for children. It’s difficult to serve soup in something other than a bowl or lasagna not cut into rectangles/squares on a plate. If ever you really want to, put beans, carrots, potatoes, etc. in a happy face and make a game out of it: whoever eats the right eye first, then the nose…! 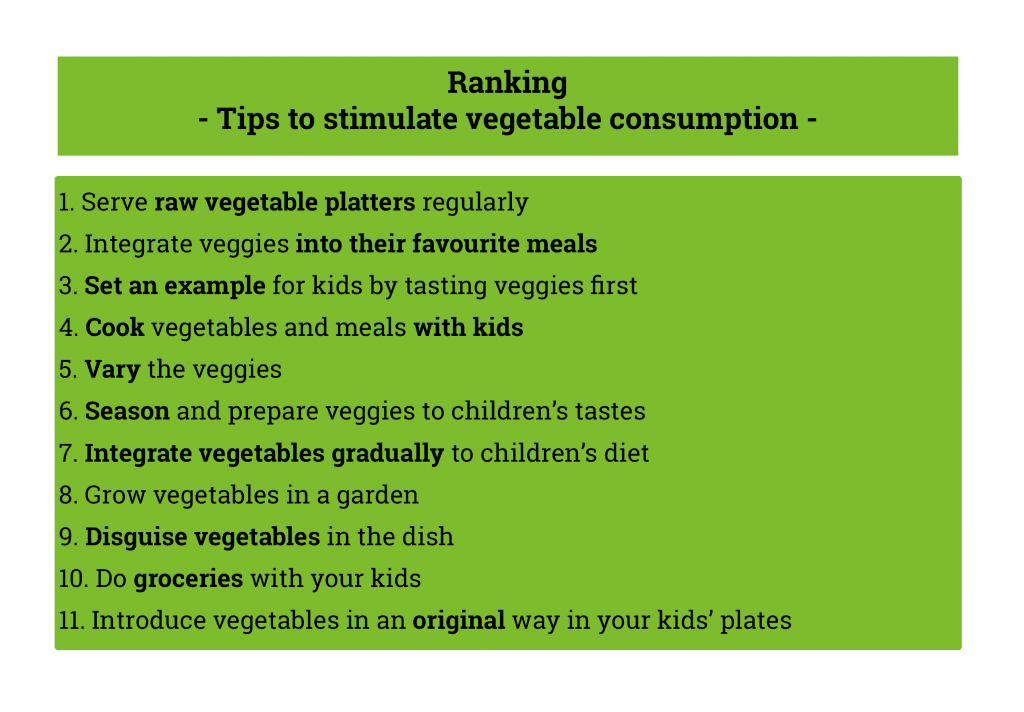 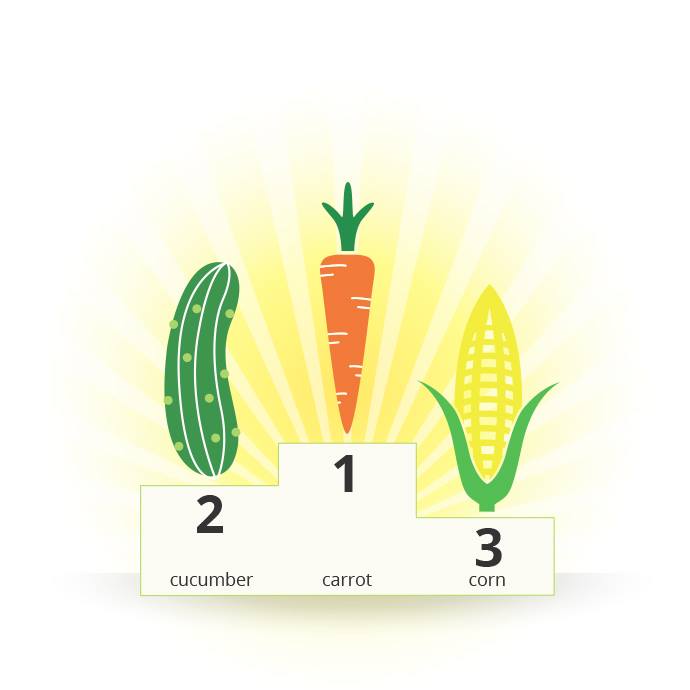 What dishes do you prepare to get your kids to eat more veggies?

According to participants, here are the top meals that are easiest to incorporate vegetables into:

Other tricks or ideas to get them to eat vegetables

At the end of the questionnaire, we asked, Which were your magic tricks to get kids to eat more vegetables that weren’t necessarily on the list? Here is the list of methods that came up the most from the answers we got:

In summary, regardless of the method(s) you use, the important thing is to have fun doing it. We’ve given you a lot of ideas for methods, for vegetables to get them to eat, for dishes that you can incorporate vegetables into to… the ball is now in your court!

The important thing is not to think it’ll be hard for you to get your little ones to eat vegetables. Who knows? You might not even have to use these methods! So what are the ways you already use? And which one of these are you going to try first?

Working on her Bachelor’s degree in Communication, Writing and Multimedia at the University of Sherbrooke, this avid blogger has always loved cooking and anything related to food and healthy lifestyles, so she’d be happy to share what she’s learned with you!

Combining vegetarian, healthy and comfort food: yes, it is possible! For the last several years, vegetarian food has been becoming more and more popular…