All you need to know about tempeh

People often suggest eating fish once a week, so why not add a meatless dish to your routine? This is why we suggest a new product that’s slowly making its way into the foray – tempeh! If you’d like to change your diet, discover new products or save money on groceries, you’ll get a lot from this plant protein that has many nutritional properties and cooking qualities.

Tempeh is a soya bean-based plant protein. Unlike tofu which is made from soya milk, it is made with the whole fermented soya bean. Soya beans are crushed and cooked with a certain type of mushroom, then follow the fermentation process.

The fermentation process lasts 24 to 36 hours at a controlled temperature during which time the mushroom expands and transforms the mixture into a dense cake. The mould looks like long white strands and is found in some cheeses like Brie.

This product is light brown and the whole soya beans can be seen clearly. This is what makes it firm and crunchy like a block of firm tofu. You can eat it alone or replace meat beautifully in chili, stews and chowders.

It tastes a little stronger than tofu and other plant protein. Actually, it’s reminiscent of nuts, mushrooms, yeast and in some cases, even meat. Tempeh also contains the famous fifth sense discovered by the Japanese – umami – that gives dishes more flavour.

You can also find smoked or flavoured tempeh for dishes like skewers and stir-fries or for hamburgers, tacos or chili.

The origin of tempeh: where does it comes from? 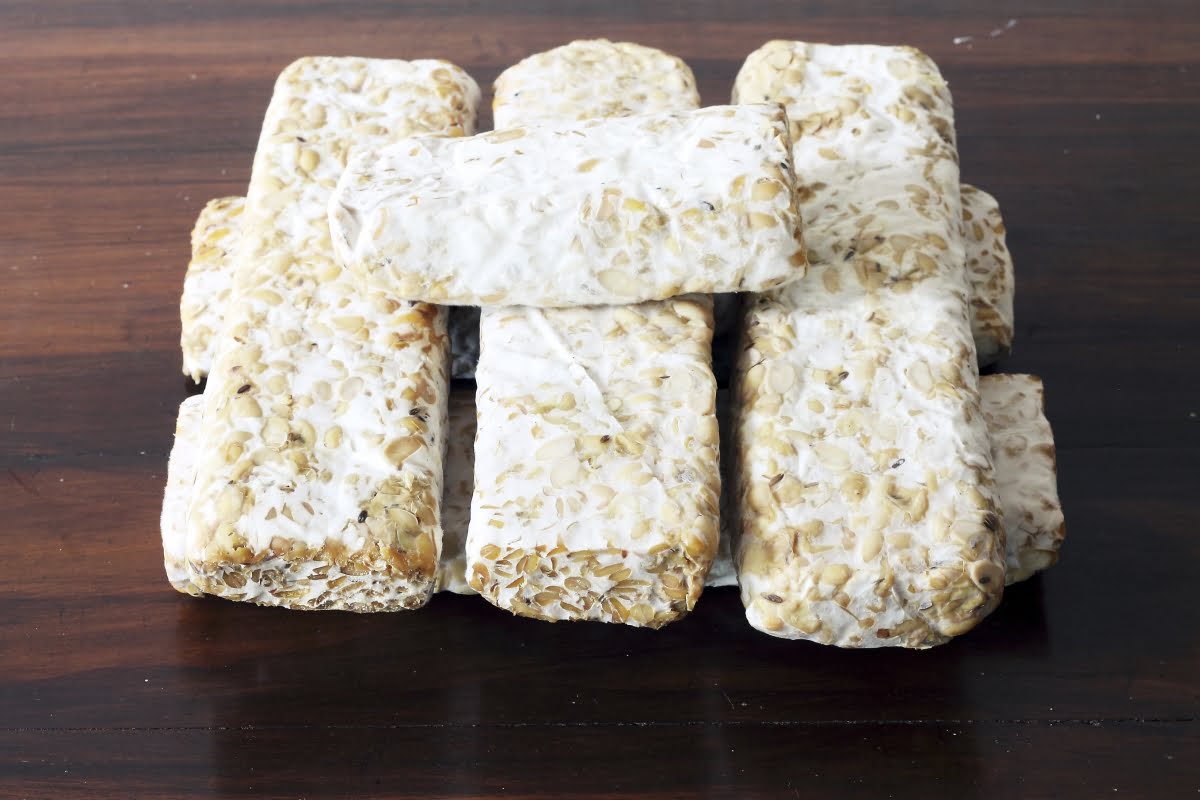 This bean-based plant protein is a product originally from Java Island in Indonesia. It came about accidentally when Chinese immigrants in the 17th century were making tofu. When soya residue was being stored in some wetlands, it captured spores and mushrooms grew on the beans. The poor who had started eating it discovered it was edible. So this is how the dish came to be associated with the working class. It’s now spread across Indonesia and is an excellent alternative to meat. It’s the protein of choice in Indonesian cuisine.

Nevertheless, tempeh wasn’t introduced into Western cooking literature until the 19th century when Dutch scientists published articles on their travels to Indonesia that at the time was a part of the Dutch East Indies. That’s how te was introduced to Europe and since then, it has slowly started appearing in grocery stores in North America.

Tempeh’s fermentation process and use of the whole soya bean makes it high in vitamins, proteins and minerals. In fact, compared to tofu, this product contains more protein, potassium, copper, phosphorus and magnesium which make it an excellent antioxidant. It contains 3 g of fibre per 100 g and has more good fat and vitamins than tofu. It’s because of its nutritional value that this bean-based plant protein is used worldwide in vegetarian cuisine.

Cooking tricks: How to cook tempeh?

It’s easy to cook with it because you can do anything with it. The benefit is that it stays crunchy even after it’s cooked. It’s versatile and can be adapted as a meat substitute in different kinds of dishes.

It can be eaten raw, but you have to be careful. It’s strongly recommended to always keep it refrigerated so it’ll stay as fresh as possible and also to consume in moderation.

Some people aren’t crazy about tempeh’s naturally strong taste which is reminiscent of mushrooms. If you’re worried this the first time you try it, try boiling it a little which will help mitigate the taste created by the mycelium. Simply place sliced tempeh in a baking dish and cover with water or vegetable stock. Bring to a boil, simmer for about 10 minutes and remove from the dish. Continue cooking it as desired.

Although tempeh has a natural flavour, it absorbs marinades very well just like its cousin tofu. But it absorbs more quickly than tofu, so you don’t have to plan too much in advance if you want to give it different flavours. Here are a few examples of ingredients that make good marinades:

Add a few of these ingredients to your marinade to increase the taste of your tempeh considerably.

Want to vary your Asian stir-fries? Replace meat, seafood or tofu with tempeh. Steam beforehand and continue cooking in a frying pan or wok by stir-frying veggies and your favourite noodles or rice. You’ll love the nutty taste!

Like other plant proteins, tempeh is excellent grilled. Cut into 1″ slices or cubes and add to your skewers or grilled platters. The bean-based plant protein will remain tender on the inside and crunchy on the outside. It also won’t stick to the grill or pan, so you don’t need much oil for cooking. As well, grill or fry tempeh just until the edges become crispy and you’ll improve the natural nutty taste!

Baked tempeh can be seasoned or marinated, but if you decide to use dried spices, it’s recommended to boil it beforehand so it stays tender. If you marinate it, cook it in the marinade itself. It will absorb all of  the marinade’s flavours after cooking.

Like tofu, tempeh takes on the flavour of the dish it’s cooked in. A bourguignon without the beef? Replace the meat with cubed tempeh in this typical French dish. Just crumble a bit for a spaghetti sauce and voilà! You’ve got yourself a veggie spaghetti! Finally, grate some of this prodcut into Mexican dishes like tacos or chili for a healthy meal that’s rich in protein. 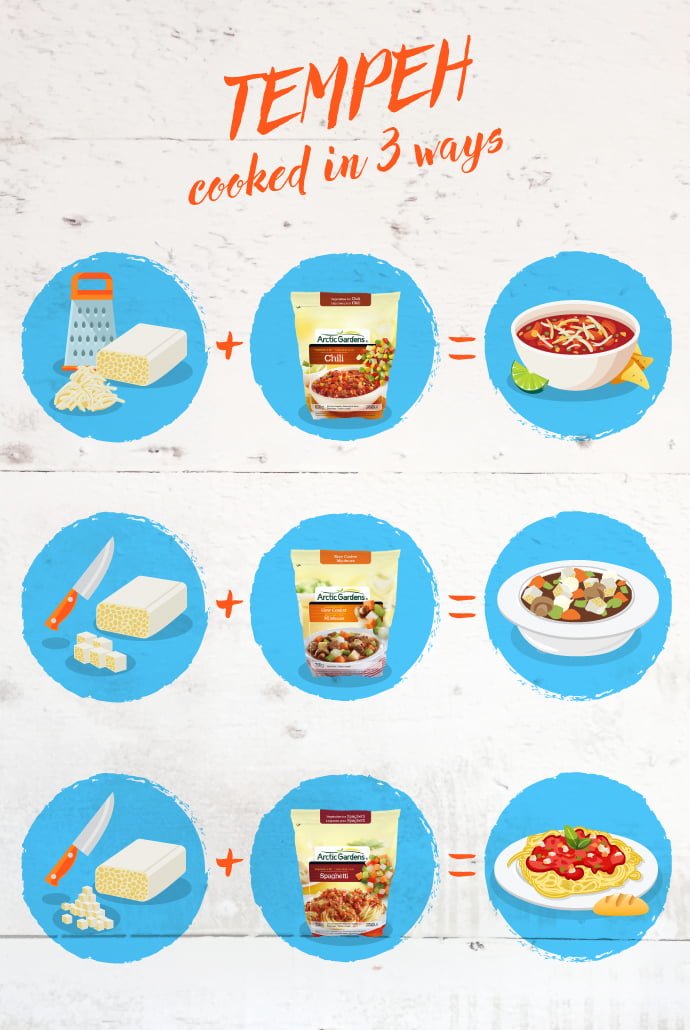 This product goes in everything and can easily replace animal protein in meat-based recipes. There are hundreds of easy recipe books and on various websites, and you don’t have to be a good cook to use it. Here are a few recipes you can try at home:

Where can you buy tempeh ?

You can also find it in the aisles of some of the big grocery chains like IGA, Sobey’s and Superstore. This product is generally found in the organic or vegetarian section.

Canada can also count on the big tempeh producers in many provinces like Noble Bean located in Montreal, Henry’s Tempeh in Kitchener, Ontario, and Green Cuisine in Victoria, BC.

Are you curious about tempeh? Or maybe you already know and love it. Share your recipe ideas and how you incorporate it into your diet!

Student in Communication-Marketing at the University of Sherbrooke, Philippe is interested in everything that relates to the kitchen. Young cook in his spare time, he likes to prepare recipes, trying new ingredients and love to be out of his comfort zone. He always tries to find new ways to prepare dishes with his interest in food, gardening and cooking. He gives you his culinary passion and love of food.